DC recently announced the launch of its newest digital first series, Harley Quinn: Black + White + Red, which will publish each Friday and be comprised of 14 chapters. The digital series will be similar to Batman: Black and White in that each chapter in the anthology will be a standalone story. The first chapter is now available on corresponding digital platforms, including readdc.com, Comixology, Amazon Kindle, Apple Books and more.

The first chapter will be acclaimed creator Stjepan Šejić’s last Harley Quinn story as he will be returning to creater-owned work in the future. Future chapters will include acclaimed Batman universe creators such as Harley Quinn co-creator Paul Dini, Eisner Award-Winners Saladin Ahmed, Erica Henderson and Joe Quinones and the fan-favorite Harley Quinn team of Amanda Conner, Jimmy Palmiotti and Chad Hardin.

Check out this preview of Harley Quinn: Black + White + Red Chapter One with story and art by Stjepan Šejić and lettering by Gabriela Downi.

According to DC Comics’ press release, “Each chapter of Harley Quinn: Black + White + Red will be told in traditional black and white with the color red utilized in unique ways throughout each of the individual stories. The debut chapter of the Digital First series is “Harleen: Red” by writer/artist Stjepan Šejić with lettering by Gabriela Downie. Set in the world of Šejić’s New York Times bestselling graphic novel Harleen, this story hints at a “red” that will have meaning only to Harley Quinn!

Did you enjoy this quick Harley Quinn: Black + White + Red Chapter One preview? Let us know what you think in the comments. 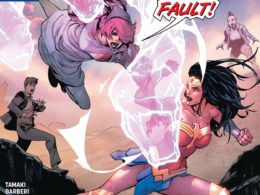 A brand-new foe has made her presence known in the life of Wonder Woman, and Liar Liar isn’t…
byJay W
No comments