Batman Beyond and Damian Wayne are going to have to join forces in order to stop Mr. Zero and his radical faction from turning Gotham City into an ice-covered hellscape. Damian will have to put his disrespect for the “pretender” that is Batman Beyond aside if they’re going to stop this mutual foe-and even then Mr. Zero’s power and influence might prove too much for this pair!

ENSNARED IN THE WEB! As New York begins to crack under the weight of Knull’s symbiotic assault, Matt…
byJay W
No comments

In this prelude to “Batman: The Joker War,” the story of Two-Face reaches its end, and Harvey Dent…
byJay W
No comments 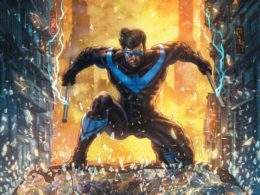 Christmas has come to Gotham City, and all across the city people have taken time out of their…
byJay W
No comments

THE BATTLE TO DECIDE THE ALL-NEW PHOENIX RAGES ON! Who will wield the destructive cosmic power of the…
byJay W
No comments