Superman movies are a “huge priority, if not the biggest priority” and Green Lantern is “important,” says James Gunn

James Gunn and Peter Safran might have been made co-chairmen of DC Studios only a few short months ago but already they’ve been shaking things up for the DC Universe; among news that Patty Jenkins was no longer associated with Wonder Woman 3, Jason Mamoa might make his final appearance as Arthur Curry/Aquaman in Aquaman and the Lost Kingdom (with Amber Heard still appearing as Mera, despite the outcry of fans) and The Batman 2 was still in production despite the new leadership, there is still one question on DC fans’ minds: will Superman return?

“Superman premiered 44 years ago today,” Gunn tweeted. He also shared the 1978 film’s poster along with its tagline, “You’ll believe a man can fly.”

When a fan asked what Gunn meant by his tweet, Gunn replied, “I’m trying to say it’s the 44th anniversary of the premiere of Superman which is a great movie.”

The next question was more direct. When asked if Superman would be returning to the big screen under Gunn and Safran’s tenure, he answered, “Yes of course. Superman is a huge priority, if not the biggest priority.”

Gunn did not confirm whether or not Henry Cavill would be returning as Superman, which was the intent under previous DC Studios boss Walter Hamada (and something that was reportedly incited by prodding from Dwayne Johnson, the star of Black Adam).

Gunn’s next tweet foreshadowed the inclusion of another integral member to the Justice League pantheon. When asked about Green Lantern content, Gunn replied with one word: “Important.” He also made it clear that Ryan Reynolds, who will be reprising his role as Deadpool in the MCU in the near future (with Hugh Jackman returning as Wolverine) would not be attached to the role.

“Although this first month at DC has been fruitful, building the next ten years of story takes time & we’re still just beginning,” Gunn said on Twitter on Thursday. He and co-CEO Peter Safran are scheduled to meet with Warner Bros. Discovery CEO David Zaslav sometime next week to further delineate their strategy and vision for the DC Universe. We’ll keep you updated as more information becomes available.

What do you think of the news that Superman movies are “a huge priority” under new DC Universe co-CEO James Gunn? Let us know in the comments.

The world of Batman: The Animated Series will finally get its first taste of one of the most…
byJay W
No comments 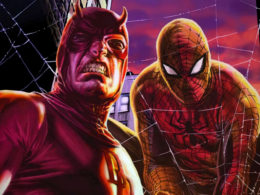